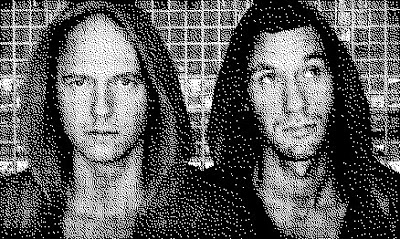 Hey Today! need little introduction on this blog, since we’ve spent the last few days talking about how awesome they are and harassing them with questions. Being the nice guys that they are, they’ve agreed to answer even more of our questions. Here’s what they had to say.

Hey Hey Today!! Thank you for your time. How’s it going?
Great.

On your MySpace page you describe your music as “e-rockabilly”. What do you think are some of the similarities between rockabilly and your style of electro?
Rob: Rockabilly is (a type of) dance music which focuses on movement. Like rock & roll, but with more “roll”. Just listen to Psychobilly Freakout by Reverend Horton Heat and you’ll know what I mean. It’s great to dance to and, well, just freak out. These are the main similarities we want to show in our music.

You are a relatively new name on the scene but have already remixed some established artists such as Zombie Nation and Digitalism. How did this come about? Did it help that they are also German?
Raik: They asked us to do a remix. We think they are both great producers and musicians as well, so we did it. We also remixed Shazam and Empire of the Sun. These two acts are also cool, popular and lovely musicians. And they are from Australia.

You also did a rework of Armand Van Helden’s classic track Necessary Evil. Do you happen to know if he liked it?
Raik: I don´t know if he knows about the edit. We grew up with songs like Witch Docktor, Psychic Bounty Killaz and Spark da Meth. He´s a pioneer to us and has earned a lot of (our) respect. We did the edit of Necessary Evil initially to play it in our DJ sets. Then it got a lot of support from our friends like Zombie Nation, Digitalism, Bang Gang DJs and many others.

We have seen a lot of German talent emerge onto the electro scene in the last few years. Is the German club scene still dominated by minimal or is electro becoming the new music of choice for the majority of club-goers?
Raik: The electronic music scene has been a huge part of German culture for many years. You are right when you say that there was a lot of hype about the word “minimal” in the last days. But I guess the scene in Germany is getting more open minded. More crossover, not only one-way. That’s (a) good (thing).

On a global level the whole electro scene has become popular beyond belief. We realize that predicting the future is a tricky thing, but still – do you think the scene will grow and grow until it ends up eating itself?
Rob: Who knows? But I think electronic music is on the edge of time and it will last a while. I think a strong relationship with science and the ability to connect with any other style of music is a great foundation for evolving into the future.

How long have you guys been working together? Before Hey Today! you produced under the name of Trashtalk, but that’s pretty much all we know. Could you shed some light on your origins?
Raik: We’ve been making music together for 5 years now. (It’s) a short and simple story. We’ve shared some friends so we would meet from time to time. We’ve had a lot of liking for each other since the beginning. We liked each other’s skills and points of view, so we went to the studio and made music. And that’s how the story started.

As Trashtalk you released a song called Tank Girl. Are you fans of comics? Or do you just have a thing for women and heavy artillery?
Rob: It simply sounded like that. Like a mad girl on a fat tank in a third world war.

Has music making & DJ-ing now become your full time job or do you still have regular day time jobs? Do your mothers know what you do?
Rob: Our moms support us. It took some time for them to start trusting in our ways. But, to be honest, they had to because they had no other option.

By looking at your pictures, we happened to notice that one of you doesn’t have a lot of hair on his head. Mr. Oizo says he hates bald people. Do you feel threatened? Why is he such a hater?
Raik: I don´t feel threatened. Is Mr. Oizo a hater? I´m not interested in this (sort of thing). He´s a good producer and DJ. You know, I think it’s better to know what you like instead of what you hate.

We’re sure a lot of young producers out there would like to know how you approach making a song. Would you mind discussing some technical aspects of your production?
Rob: Electronic music is ruled by technology, methods and craft. But (it’s) also (like) you are a cook, an architect and a director (at the same time). To be idealistic, for me it needs to be deeper than taking a 4/4 beat and a fat bassline, adding a huge breakdown, then compressing and sidechaining the hell out of it. Music needs a soul. An idea, a vision or a dream, which (…) grows into a little world of its own.

If you could choose to remix any song in history of music, which one would that be? If you could hand out the remixing duties for a song of yours to any artist, living or dead, who would that be?
Raik: David Bowie’s Look Back in Anger. And maybe some songs from the Motown repertoire could be very interesting. Yeah, and it would also be interesting (to hear) The Funk Brothers (the studio band of Motown) play one of our songs, like If I was Wonderman or Walkthrough. With live Instruments… that could be really amazing.
Rob: I would like to have the solo tracks of Carl Orff’s Carmina Burana and half a year off to get deep into my own interpretation of Miss Fortune. But that can wait until I’m sixty and in the mood for such serious stuff. For now, Michael Jackson’s Don’t Stop ’til You Get Enough would be nice.

Do you have any shout outs to Slovenian clubbers? Any words of warning to all those thinking of coming to your gig?
Let’s play: “Who does the best party ever at K4?” You can win first prizes in the categories Marathon Dancer, Loudest Shouter after Croaky and a bonus prize for the pogo guys. The prizes are sponsored by the cool guys of K4 ;)

Thanks again and we’re looking forward to rocking out with you!