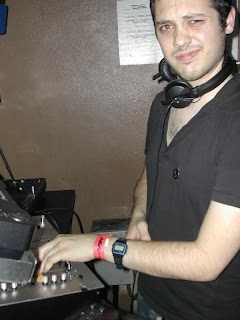 1. Where do you come from and how did you get involved with music?
I come from a small place in the north east of England called Durham. Its lovely there but very boring, so I got out of there by pretending to do a degree in Nottingham. That’s where I started DJing. I was already into dance music through my brother who went to uni in Manchester and used to bring back tech house records and other stuff which I found very exciting when I was about 15 in Durham, so started buying my own and DJing in my bedroom.

2. Where and how do you live now, does the place (city, country) somewhat reflect in your music?
I live in London now which is great for DJ gigs and going out as there is so much going on and lots of variety, however I haven’t being here very long so London hasn’t yet had much of an influence over my music. We’ll see.

3. Do you have some classic music training?
I have no musical training at all.

4. Were your parents supportive when you started your production/DJ career?
Yes they were. Although it took them a while to realise you could actually make a living from it, so at first I kept being ask when I was going to get a ‘proper job’. Actually I still get asked that now.

5. Do you follow trends (music, fashion,…) and does your current music style reflect what’s trendy right now?
At first I did, when electro was really exciting a few years ago. When I was first doing gigs in Nottingham I was obsessed. I’m moving on now though and trying to do my own thing. I’m really into a much deeper sound and disco now, which seems to be getting quite trendy now but not exactly mainstream like electro has become.

6. Which country/music scene has the most creativity in musical output right now?
Disco producers and labels like DFA in New York are making some amazing stuff at the moment. There isn’t a huge amount of it but the quality is really high which is the most important thing. In London everyone is having a go but there’s a lot of rubbish around.

7. Favourite album of all times?
Power, Corruption and Lies by New Order.

8. Why is/are you best friend/s your best friend/s?
You can rely on them to have a good time and make you laugh and stay up late drinking and act like idiots.

11. If there were no limits (space, time, endangered spieces…) – what pet would you most love to have?
A Jack Russell called ‘Geoff 200’. A dog will always be the ultimate pet. Was I supposed to say T Rex or something?

12. What are you most proud of in your life?
DJing in my bedroom and thinking one day I’ll do it for a living, then going out and doing it.